Road DVD was in Heatons Mallow today for €13, so good chance it’s in all branches nationwide.
Mallow had 4, I took 2.
Christmas gift shopping done before Halloween!

TAS team set to link up with BMW

The Northern Ireland-based TAS Suzuki team are set to run BMW bikes at the main international road races in 2015.

The Moneymore outfit, who have fielded Suzuki machinery for many years, are expected to re-sign William Dunlop and Guy Martin for next year.

Michael Dunlop rode BMW Superbike and Superstock bikes for the Buildbase Hawk BMW team this year, but now appears to be without a ride for next season.

The 25-year-old won the 2014 Superbike, Senior and Superstock TTs on BMWs.

He also won one of the Supersport races on a 600cc Honda to complete his second successive four-timer at the Isle of Man event.

The younger of the Dunlop siblings also won a Superbike race at the North West 200, with his elder brother William winning the other ‘big bike’ outing for the TAS team.

William went on to record a third place finish in the second Supersport TT and was pushing for the race lead in the Senior TT as he lapped at 130.80mph.

Martin enjoyed a highly productive TT week with second and third place finishes in the Superbike and Senior.

The TAS team, run by Hector and Philip Neill, will campaign the BMW bikes at the North West, TT and Ulster Grand Prix, as well as the British Superbike Championship, ending their long a**ociation with Japanese manufacturer Suzuki.

Michael Dunlop confirmed that he had lost his seat with BMW but added that he was "not overly concerned".

Dunlop will also now not compete at next month’s Macau Grand Prix. 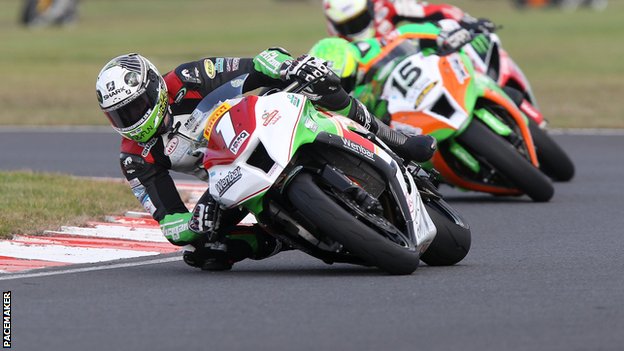 Buchan won from Gearlink Kawasaki rider Ben Wilson, with Andy Reid from Jordanstown third on his first Superbike ride on the Milwaukee Yamaha.

James Egan, Alastair Seeley and Jamie Hamilton made up the top six.

Glenn Irwin, who set a new lap record in winning the Supersport race, crashed unhurt while leading the Sunflower.

The Carrickfergus rider came off on the opening circuit of the 12-lap race.

Buchan won the first Superbike outing of the day from Wilson, with 2013 Irish Superbike champion Nico Mawhinney completing the podium.

Irwin was also victorious in Supersport race two, with Wilson runner-up and Seeley third on the Mar-Train Yamaha.

Reid fell off unhurt in Superbike race one while Christian Elkin took the chequered flag in the opening 125cc/Moto 3 outing.

Australian star Billy McConnell hopes to make his debut at the North-West 200 road races next May.

The recently-crowned British Supersport champion was at last year’s North-West as a mechanic to Gary Johnson and Michael Rutter.

Glenn Irwin from Carrickfergus, fourth behind McConnell in the Supersport series, will be competing at the NW200.

He made his road racing debut at the 2014 Ulster Grand Prix – and now wants to follow in his famous dad Alan Irwin’s footsteps and compete on the north coast.

Aussie McConnell, 27, said: "I was at the North-West this year and it is a well-run meeting.

"It was fantastic to watch guys racing around the roads at that speed.

"There is something about having closed roads and going as fast as you can.

"It has massive appeal to everyone and I am definitely going over to have a look."

Irwin, who has made a big impact on the short circuit scene, has also been courted by the North-West organisers, and he has agreed to be on the grid next May.

"I really enjoyed my time at the Ulster Grand Prix," said the winner of five races in this year’s British Supersport Championship.

"The North-West is one I have always wanted to do, really since I started thinking about motorbikes.

"I remember standing at Juniper Hill back when dad was racing. He quit in 1996 so it was a long time ago, but I still remember that.

"It is a big event and gets a lot of exposure with the live streaming on the internet. I am definitely up for doing it."

The first ten teams on the list have been sent their paperwork! I will be sending it out in batches of ten. Once this first lot have been fully signed up and have sent everything back the next ten will be contacted.

Ed will be setting up an autograph booth during the day, "no fat chicks" he says and James Kelly & Cody Nally will be hosting a meet and greet behind the Scrutineering bay.

Hi lads just wondering did anyone take photos the last trackday of the season…..

The Lisburn-based team has pulled out of the British Supersport championship, where Alastair Seeley raced their YZF-R6 Yamaha to second place this year.

The team will consist of one rider and will campaign in the Supersport, Superstock and Superbike classes.

Mar-Train said they they expect to announce the name of the rider in the coming weeks.

The local team enjoyed three consecutive seasons in the British Supersport series, including a championship success with Stuart Easton in 2013.

They also took in the three international road races this year.

"To be the official Yamaha UK entrant is a fantastic accolade for a family run team such as ourselves," said team principal Tim Martin.

"We have had a strong relationship with Yamaha UK over the past four years, winning two dozen British Supersport races and a North West 200 on the fantastic YZF-R6 plus numerous other national victories.

"Having the security of a two year deal shows Yamaha’s intentions and commitment to the project, and also their confidence that we can put their machines on the top step at the international events.

"This is a fresh and exciting challenge for us and one I am relishing – 2015 cannot come soon enough."